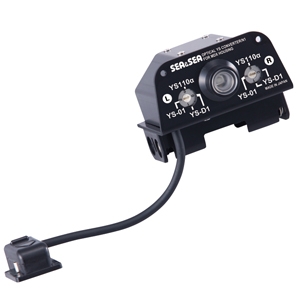 The Optical YS Converter mounts inside the housing and connects to the camera's hot-shoe. It converts the camera's electronic TTL signal to a light signal which is transfered to your strobes via *Fiber-Optic Cables.

TTL and Manual modes can be selected by pressing the Mode Switch on the housing.

Advantages of using the Optical YS Converter instead of the camera's built-in flash (or hardwiring via the bulkhead);

- Risk of water-ingress and flooding via the strobe bulkhead is eliminated.

- The camera's battery will last longer.

- External strobes will fire in accordance with their quickest recycle time.

- Optical YS Converter is compatible with SLR cameras that do not have a built-in flash.

Auto Power Off: The converter will automatically power off if the shutter lever or the mode switch is not activated for more than one hour.

* The converter can be re-activated by pressing the mode switch.

Check Compatibility Chart for your camera + housing specifics and any relevent notes.

Optical YS Converters cannot be fitted to older SEA&SEA housings not designed to incorporate them.